Nothing screams fall quite like frosted pumpkin pie spice cinnamon rolls! Each bite is bursting with pumpkin and pumpkin spice and truly tastes like everything you love about the season. Made with all-purpose flour, pumpkin puree, pumpkin spice and sweetened with honey, they are sure to be a pumpkin recipe you keep coming back to year after year.

It should come as no surprise to you that I make a lot of pumpkin recipes between August and November. I always felt a little intimidated when it came to cinnamon rolls because they do require patience and a little bit of time to get just right. This year I finally felt up for the challenge and am so excited to share these frosted pumpkin pie spice cinnamon rolls with you!

I wanted to make a batch of pumpkin cinnamon rolls unlike all the rest. Extra special, spiced just right, full of pumpkin and a recipe that you could keep coming back to year after year. I’m confident these are it!

Pumpkin is infused into the cinnamon roll dough and into the mascarpone icing they are topped with at the end. I used honey to sweeten the dough and swirls of dark brown sugar mixed with pumpkin pie spice fill every bite.

Perfect for a special occasion like Thanksgiving or Christmas morning, your whole house will smell amazing as these bake in the oven, reminding you of everything you love about the season!

Let’s get to it, shall we?! Get excited for pumpkin pie cinnamon rolls!

First you’re going to want to make sure you have enough time to make these cinnamon rolls from start to finish or plan to prep them in advance and cook later. All in all, making pumpkin cinnamon rolls is more simple than you may have thought — I promise!

Prefer these without dairy and eggs? No problem! My version of these pumpkin cinnamon rolls already calls for non-dairy milk like almond milk or oat milk. When making the dough at the beginning, omit the egg and replace with 1/4 cup pumpkin puree.

Did you know pumpkin puree can actually act like an egg replacer in lots of baked good recipes?! Yup! The rule of thumb is 1/4 cup per egg. And if you are looking to replace butter or oil in a recipe with pumpkin you can do that too. It’s an even swap (1/4 cup for 1/4 cup) for butter and oil too. Just another reason to love pumpkin! 🙂 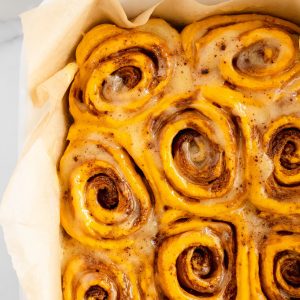 For the cinnamon roll dough:

For the pumpkin mascarpone icing:

hey there!
I'm Maggie
Welcome! Once Upon a Pumpkin is about all things pumpkin in the fall, and healthy and delicious seasonal recipes year round. Through my own health journey I want to inspire millennial women to feel confident in their food choices, and nourish and love their bodies. I'm so glad you're here!
Share
Leave A Comment
Share The Post
Pumpkin Desserts & Baked Goods

As an RD, I take my immune health seriously and al

Save this for dinner inspo! 😍🎉 I can’t get

When I need to brighten up a grey winter day this

Save this winter white bean tabbouleh for a great