Honeynut squash is the star of the seasonal dish that is packed with fall flavor and nutrition. Learn more about how the honeynut squash came about and how it’s different from a butternut squash!

What is a Honeynut Squash?

The honeynut squash was bred from other squash seeds. It was made smaller with taste in mind, which is different because most plants are bred for yield versus flavor.

Michael Mazourek, a professor in plant breeding and genetics at Cornell started by breeding two types of squash seeds together that had complementary characteristics. After those squash were harvested, he took seeds from that generation of squash and planted them. This “grandchildren generation” is when he started selecting the best of the best squash and collecting the highest quality seeds. As more generations grew, there was more uniformity in the squashes’ size, color, and texture. From there, Mazourek was able to to select the best possible Honeynut and grow more squash that were just like it.

He worked with Chef Dan Barber of Blue Hill at Stone Barns, which I had the privilege of visiting in the spring, to hone in on the flavor of this squash and make sure it was something that you and I would want to eat!

What’s super interesting is that when they were making this squash they were worried that it wouldn’t sell because it didn’t fit consumers perceptions of what squash should look like. And why would some one pay more for a smaller vegetable?! But with all our obsession with mini versions of things and tiny foods, I think this squash phenomenon is no different!

Honeynuts have an intense natural sweetness that becomes rich, caramel-y, and almost malt-like when roasted at high heat, they don’t have to be peeled because they have thin skin (similar to a delicata), and they have have three times the amount of beta-carotene ( what gets converted into vitamin A in the body) packed in.

All orange and yellowy veggies are packed with beta-carotene. Once converted into vitamin A, is imperative for eye healthy and our immune systems. Pumpkins are packed with vitamin A too. Check out this article I contributed to in US News and World Report on the health benefits of pumpkin!

To me honeynut squash tastes nuttier and cooks a tad softer compared to butternut squash.

How Do You Roast a Honeynut Squash?

Cube the squash prior to roasting or leave it in two intact pieces if you plan to stuff it like in this recipe!

I also think roasted squash cubes are great in fall salads and grain bowls! If you’re making a pumpkin or butternut squash soup, you could also add roasted cubes it to to add even more flavor! 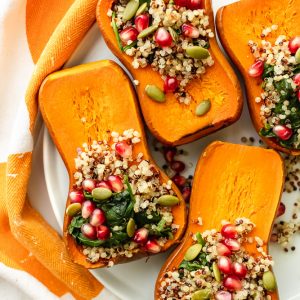 This recipe is super interchangeable if you don’t have one of the ingredients, you can swap it out for another. For example kale or arugula can be used instead of spinach. You can use parmesan or goat cheese in place of feta. And if you can’t find a honeynut squash at your grocery store, you can use butternut squash!

Fall in Love With These Other Fall Recipes Too

Pin this squash recipe for later!

hey there!
I'm Maggie
Welcome! Once Upon a Pumpkin is about all things pumpkin in the fall, and healthy and delicious seasonal recipes year round. Through my own health journey I want to inspire millennial women to feel confident in their food choices, and nourish and love their bodies. I'm so glad you're here!
Share
Leave A Comment
Share The Post

What’s thanksgiving without something pumpkin fo

My one stop shop for everything I need this holida

Dressed up delicata! 🎉Gorgeous & delicious for