Pumpkin cinnamon swirl bread is moist and delicious with swirls of cinnamon sugar in every bite! It’s made with simple ingredients, sweetened naturally with maple syrup and perfect for pumpkin season! This pumpkin bread recipe can also be made gluten free.

Nothing says fall more than a fresh loaf of pumpkin swirl bread right out of the oven! Swirls of cinnamon sugar in each bite take this super moist and fluffy pumpkin bread up a notch!

This pumpkin bread recipe is made with simple ingredients, sweetened naturally with maple syrup, and filled with pumpkin and fall spices! This pumpkin loaf is dairy free, with an option to make it gluten free as well. I just love the way the whole house smells delicious when a loaf is in the oven. Fall baking is my favorite!

If you follow me on Instagram then you know my love for all things pumpkin runs deep! I’ve made it my mission to put pumpkin into just about everything, sweet, savory and even dog treats (pumpkin is great for dogs too!)!

If you could bottle the taste of fall it would be this pumpkin bread with cinnamon swirl. It tastes extra delicious with nut butter and more pumpkin pie spice on top.

Who’s ready to get baking?!

how to make cinnamon swirl bread

can you freeze pumpkin bread

This pumpkin bread recipe is perfect for freezing if you don’t want to enjoy the whole load at once! I recommend wrapping the load in plastic wrap and then in tin foil before placing in the freezer. Reheat slices in the microwave. 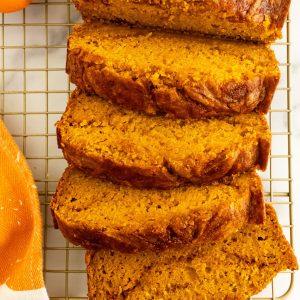 pin this recipe for later!

hey there!
I'm Maggie
Welcome! Once Upon a Pumpkin is about all things pumpkin in the fall, and healthy and delicious seasonal recipes year round. Through my own health journey I want to inspire millennial women to feel confident in their food choices, and nourish and love their bodies. I'm so glad you're here!
Share
Leave A Comment
Share The Post
Pumpkin Desserts & Baked Goods

25 Healthy Pumpkin Products You Need to Try This Fall

Save this winter white bean tabbouleh for a great

#sponsored Having almonds and almond butter in my

Save this right out of the spaghetti squash pad th

#ad How about switching things up with a savory oa