Pumpkin french toast muffin cups made with brioche bread are perfectly portioned french toast cups made in a muffin tin. Fluffy and full of pumpkin and pumpkin spice, they make for the perfect fall brunch!

Breakfast on a fall weekend just hits different. There’s something about that golden light on a Saturday morning, that makes you want to savor the moments of the morning just a little longer. When I’m not whipping up a batch of pumpkin pancakes, I’m making a batch of these fluffy pumpkin french toast muffin cups to savor the season.

Made with cinnamon brioche bread, eggs, maple syrup, pumpkin puree and lots of pumpkin spice, they’re bursting with that flavor we all know and love!

What I love most about these pumpkin french toast cups is that when you make them in a muffin tin they end up being the perfect portion size! Inspired by this recipe for pumpkin brioche french toast that can be made the night before, these french toast cups are a quicker yet just as delicious version you’re sure to love just as much. 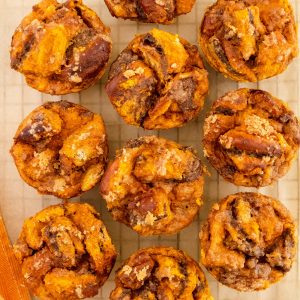 More pumpkin recipes you’re sure to fall in love with

hey there!
I'm Maggie
Welcome! Once Upon a Pumpkin is about all things pumpkin in the fall, and healthy and delicious seasonal recipes year round. Through my own health journey I want to inspire millennial women to feel confident in their food choices, and nourish and love their bodies. I'm so glad you're here!
Share
Leave A Comment
Share The Post
Pumpkin Appetizers & Snacks

The unEGGSpected and amazing benefits of eating eg

As an RD, I take my immune health seriously and al

Save this for dinner inspo! 😍🎉 I can’t get

When I need to brighten up a grey winter day this